The Holy Week, declared as a Fiesta of International Tourist Interest by the Government of Spain, is one of the most important events in Málaga, the capital city of the Costa del Sol. The annual event, which celebrates cultural values and popular traditions, starts off with processions to mark the Palm Sunday celebration (13th April 2014), and lasts the entire week until Easter Sunday (20th April 2014). Thousands of visitors from across Spain and the world come to follow the processions throughout Málaga’s historic centre. 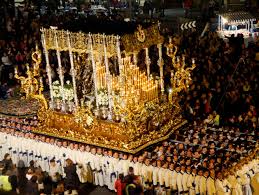 Holy Week in Málaga is an ancient tradition, going back over 500 years, dating back to the age of the Catholic Monarchs. During the week-long celebration, people take to the streets to watch exuberant, colourful and majestic processions by religious brotherhoods and associations. In Málaga, Holy Week is not celebrated in silence; instead, it is full of noise and cheer with marching parades and singing adding to the festivities. The atmosphere is celebratory – with artistic processional thrones, major floats and bejewelled religious sculptures of Christ and the Virgin Mary going down the streets. The aroma of burning candles and incense as well as flowers create an ethereal ambiance, transporting casual observers to another time and place.

Holy Week is a great time to visit Costa del Sol – it offers an amazing experience in Málaga, not only for participants, but also visitors and tourists from around the world. Those who don’t happen to be in the area around this festive time can visit the Málaga Holy Week Museum, which is open all year-round, displaying processional robes and thrones, as well as music, art and exhibitions about the traditions of Holy Week in Málaga.