A visit to the Caves of Nerja, Málaga is imperative for those visiting Costa del Sol, southern Spain. This captivating series of naturally formed caves and caverns are situated on the outskirts of Maro, about 4 km from the municipality of Nerja, which is in the province of Málaga, Andalusia. The series of caverns of the Caves of Nerja stretch for almost 5 km and have taken up to several million years to form. The caves were re-discovered in 1959 by a group of friends, and have fast become one of Spain’s most popular and spectacular historical sites, attracting hundreds of thousands tourists annually now. In 2010, the caves were the most visited attraction in Málaga. 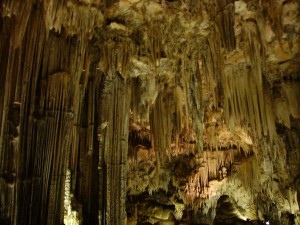 Stalactites and stalagmites of the Caves of Nerja. Source: Wikipedia

The caves are home to the largest naturally-formed column in the world, which was formed by the merging of a stalagmite and stalactite and measures 13 m by 7 m at the base and standing 32 m high. There are two natural entrances to the caves, whilst a third was created in 1960 to allow easy access for tourists. The cave is divided into two main parts, the first of which has several show galleries that are open to the public and are easy to access and navigate about. Only a third of the caves are open to the general public as they are so vast; however cave experts and researchers have access to restricted areas.

There are several aptly named caverns such as the Hall of Ghosts, with stalactites and stalagmites casting eerie shadows against the cavern walls; Hall of the Cataclysm with dislodged stalactites forming a chaotic yet beautiful cave and Hall of the Waterfall, with formations that resemble a dry stone waterfall. Every year, in the first two weeks of July, The Nerja International Festival of Music and Dance is celebrated in the Hall of the Waterfall – the natural acoustics of the caves form a natural amphitheater providing an unparalleled environment for performances.

Although the caves are very visitor friendly, tourists that visit the Caves of Nerja, Málaga should note that the caves involve lots of steps and slopes, and are not ideal for very young children or those that have trouble walking and climbing. Pushchairs and prams are not permitted, so parents will have to carry young babies. There is a lot of walking involved, so wearing sensible footwear is recommended such as sandals or enclosed shoes. Also, the temperature inside the caves is quite cool compared to the searing heat outside, so wearing a light jacket is advisable for those that have trouble with cooler temperatures.