The International Festival of Music and Dance, also known as the Nerja Caves Festival, is one of the most important cultural events in Costa del Sol. Held during summer in the delightful coastal town of Nerja in southern Spain in late July/early August annually, this festival features local renowned artists and international music bands. What makes this festival exclusive and unique is its venue – it is held inside the gorgeous Nerja Caves. The natural acoustics of the caves form a natural amphitheater providing an unparalleled environment for performances. 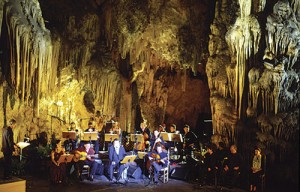 Ever since the caves opened to the public in 1960, Nerja Caves has been the location of this festival. The first edition was such a success, that the event has been held annually since then, in commemoration of the discovery of the caves. Over the years, well known acts such as Rostropovich, Sir Yehudi Menuhin, Maya Pilsetkaya, Montserrat Caballé, Dame Kiri Te Kanawa and José Carreras have performed in this spectacular location, making it one of the most sought after events in Costa del Sol. 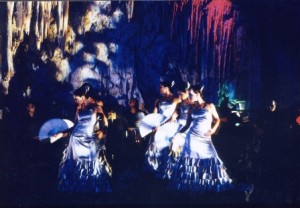 This year marks the 55th Nerja Caves International Festival of Music and Dance; it will be held from 19th to 26th July 2014. The main hall in the cave has a capacity for 550 people, with tickets costing €30 to €40. This year’s edition will be the biggest to date, with eight separate performances. However, half of the events will take place outside the caverns on the Balcon de Europa, due to conservation concerns. All performances held outside are free of charge, and perfect for those who do not manage to get the much sought after tickets.

International Festival of Music and Dance

The first four performances will be held on the Balcón de Europa and will be free of charge.

Monday July 21st 2014 - Lebanese violinist Ara Malikian and his orchestra as well as Fernando Hurtado and his dance company will perform.

The final four performances will be held in the Nerja Caves – tickets are €30 to €40.

Saturday July 26th 2014 – Concert by Diana Navarro, accompanied by the Aljarafe Symphony Orchestra under the baton of Pedro Vázquez.