After almost a decade of planning, Malaga has finally opened a light metro network to the public. The ($1 billion) underground system was inaugurated on 30th July 2014, with two lines open in partial service. Four more lines are planned, for a total of six lines eventually radiating outwards from Malaga city centre to the rest of the surrounding area. Malaga is the seventh Spanish city to operate metro services, and the second in the region of Andulusia after Seville. Other cities in Spain with established metro systems include Madrid, Valencia, Barcelona, Bilbao and Palma de Mallorca. 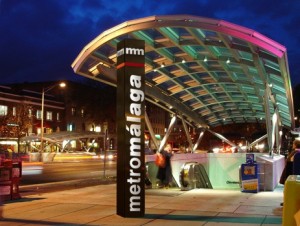 Although stations in Malaga city centre are not yet complete, the two lines that are open cover over 10 km and connect the city centre to essential services such as hospitals, University of Malaga, City of Justice, the Sports Palace and the Port. Both lines run underground in Malaga city centre. Line 1 (Teatinos) runs inward and connects the city centre to University of Malaga; it also runs at the surface for a few stations until Andalucía Tech terminus. Line 2 (Carretera de Cadiz) is completely underground and runs from the city to Jose Maria Martin Carpena Arena. This line runs closer to the coast, covering La Isla, El Torcal, La Luz – La Paz and Puerta Blanca. Both lines interchange at the El Perchel station.

Line 1 and 2 of Malaga Metro

Dubbed the capital of the Costa del Sol; tourists from all over the world flock to Malaga to experience the vibrant culture, subtropical Mediterranean climate and exquisite cuisine, in addition to the endless activities, adventures and attractions on offer. Malaga has needed this metro rail network for several years now; like all modern cities, its streets are crowded with vehicles, making travelling here quite a difficulty for locals and tourists. The tens of thousands of holiday makers who travel to Costa del Sol will find travelling around much easier. The metro will improve the lives of residents, workers and visitors, as people can now get around town easily. Also, with the implementation of the metro systems, people can leave their cars at home, benefiting the environment.